This was a post I originally did on Facebook Notes. I wanted to post it here as well.
As you know I am a big Apple fan. Its the ecosystem I enjoy the most and the way things work on iOS just makes sense to me. Android, which I have a Nexus 7 tablet, just seems clunky to me. Other than the whole Google services issue the design is my major dislike about the ecosystem. I will admit that each new version of Android it gets better. Android L looks better but I hate, did I say HATE widgets. I know there are a ton of people who like them but I don’t want them or need them.
Ok off the Soap Box. Which my Nexus 7 getting a little long in the tooth I am looking at getting another Android Tablet. I use it because of work. I need to know both Android and iOS. Having the Nexus 7 has allowed me to get to know the ecosystem a lot better than I would have just by observing or using someone else’s device. But let’s face it the only time I use it is to watch movies on planes and have it as a tablet backup. It’s not my every day device by any means. I want to start looking for something to replace my Nexus 7 but want a pure Android experience. Nexus devices are the first to get updates and have no maker/device restrictions.
September was a big month for release of Tablets. Apple announced the release of the iPad Pro. A few weeks later Google announced the Pixel C tablet. These a lot of people saying the devices are a ripping off the MicroSoft Surface. While the design maybe similar to me that’s where these stop. The Surface had an interface that wasn’t really optimized for touch. Both the iPad Pro and Pixel C are made from touch operating systems.

I think tablets are really the future of computing

Why am I interested in both of these? I think tablets are really the future of computing. Most of the general public will be using their phone as their main computer. They will be buying less and less desktops and laptops. This is fine for the general user who wants to do social media, email and some web service. This is not great for those who do video editing, long form writing or other content creation. You need more tools than the average consumer. Case in point, I love to edit video. I’m a novice but its something fun to me. In the last six months I have been doing a lot of it on my phone. Why? because it’s just easier and quicker to do than opening iMovie or Final Cut.
Ok, let’s take a look at these two Tablets. This will be a specification comparison over a hands on. At the time of writing this neither tablet is out. The release dates are: Pixel C – Holidays and iPad Pro – November. Let’s take a look at the specs
I gathered info from Android Centra, Apple, Google and Digital Trends (see my citations below). The one thing I didn’t see was the cost of the 64 GB Pixel C.
Both the Pixel C and iPad Pro both look interesting. For a lot of people it will come down to which operating system you currently have and like. I personally want to get one of each and try them out. While listening to the TWIT Network Special on the Google Keynote, they mentioned the NVIDIA processor is desktop grade. This has me thinking what is Google up too with this tablet.
These tablets are made for more than just surfing the net and doing email. They are both about productivity and work. The success of these tablets will depend on the apps that are developed for them. I see Apple having more apps currently but that doesn’t mean it won’t change after the Pixel C is released. Android is making advances with each new release to make it easier to use for the general public. This is just my opinion and is shown in the Material Design they have released with Android Lollipop.

Let’s put aside the debate of the Window Surface. The factor form of the Surface I think is perfect. A light weight tablet you can use with a keyboard and accessories. Where Microsoft got it wrong was Windows 8. The “One Ring To Rule them all” mentality just didn’t resinate with consumers. It was too much too fast. On the other hand both Android and iOS have been evolving over time. Both systems were developed as a touch screen system. Microsoft’s first attempt at touch should have focused more on the interface and touch. We will see if they change their minds.
Who are the consumers of each tablet? It is my opinion that Apple is going directly after business. In the September Keynote they had a focus on healthcare. It is a market they want to be involved in. Also, the new pencil and screen are aimed at artists. The Pixel C is aimed more at consumers, I feel. I think they are also testing how to get Android into the business environment.
Which Tablet will win? I think it’s way to early to tell. There is space for both on the market. Its great to have competition to push each company. I love the Apple ecosystem but Google forces Apple to innovate and vice versa. Throw in the mix Microsoft, Samsung and Huawei and it will get interesting.
Why do I want both? Being in marketing you have to market to consumers on both devices. You really need to know how each system works. What are the benefits and draw backs of each operating systems and how that impacts your customers. You should know at least the basics of both ecosystems. If you can’t afford to get one of each device make sure you have a friend who can give you feedback on the other ecosystem.
I look forward to both of these devices and hope you will keep an eye on each and if you get one let me know how you like it. I hope to do a hands on comparison sometime next year of the two tablets and accessories.
Citations: 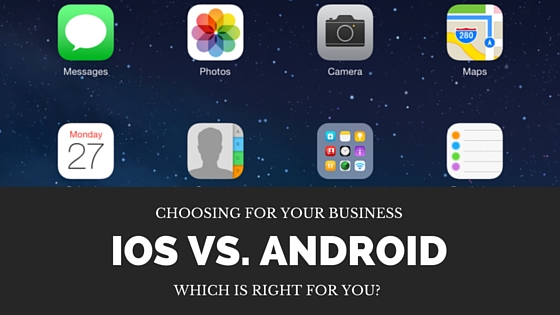 iOS Versus Android Which Should You Choose?